Person conducting excavation: prof. Bartosz Kontny
Country: Poland
Site name: Lubanowo Lake
Type of the site: ritual place
Involved institutions: Institute of Archaeology and Ethnology, Polish Academy of Sciences
Description of the research:
Starting from 2014 the team of scholars (Tomasz Nowakiewicz, Bartosz Kontny, Artur Brzóska, Piotr Prejs) and students from IA UW (initially featuring the Institute of Archaeology and Ethnology, Polish Academy of Sciences with Aleksandra Rzeszotarska-Nowakiewicz) has carried underwater survey in the Lubanowo Lake (former Herrn-See) in Lubanowo village (ex-Liebenow) in Western Pomerania. During underwater research weapons, tools, and horse harness elements (including chain reins) were found. They are dated mainly to the Roman Period but exceptionally also to the Middle Ages. Some items bear traces of ritual destruction. The parallels to Roman Period weapons may be identified namely in the Przeworsk Culture and to some extent also in Scandinavia. The site should be attributed to sacrificial military deposits. Its extraordinary character lays in the fact that, so far, it is the only site of that type which is still in its ‘lake stage’, i.e. not a marsh or bog. Most probably it was used by local inhabitants, i.e. the peoples of the Lubusz group. As refers to later finds the weapons, tools and pottery from the Early and Late Middle Ages were found; at least part of them may be interpreted as ritual deposits.
Literature:
B. Kontny, T. Nowakiewicz, A. Rzeszotarska-Nowakiewicz, The Turning Point: preliminary results of underwater research of the former Herrn-See at the vilage of Lubanowo (Western Pomerania, Poland), “Archaeologia Baltica” 23 (2016), 45-57.

Person conducting excavation: Kamil Niemczak MA, mgr Iwona Lewoc MA
Country: Poland
Site name: Wólka Prusinowska
Type of the site: cemetery
Involved institutions:
Terra Desolata Foundation
Description of the research:
The cemetery in Wólka Prusinowska (Ger. Pruschinowen Wolka) is located on the north-eastern high bank of the Wielki Zyzdrój Lake. It was discovered at the end on the XIX century. During the modern excavations we discovered – among them – bronze bow brooch, disc brooches with wooden insert, bronze tweezers, iron buckle with trapezoidal frame. It is evidence of contacts Olsztyn Group with Avars. Apart from that we found several hundred fragments of pottery. Part of it was decorated.
More info: terradesolata.pl
Project/sources of financing:
Institute of Archaeology, Consultative Council for Students’ Scientific Movement of  University of Warsaw, Universitatis Varsoviensis Foundation, University of Warsaw Foundation, Terra Desolata Foundation 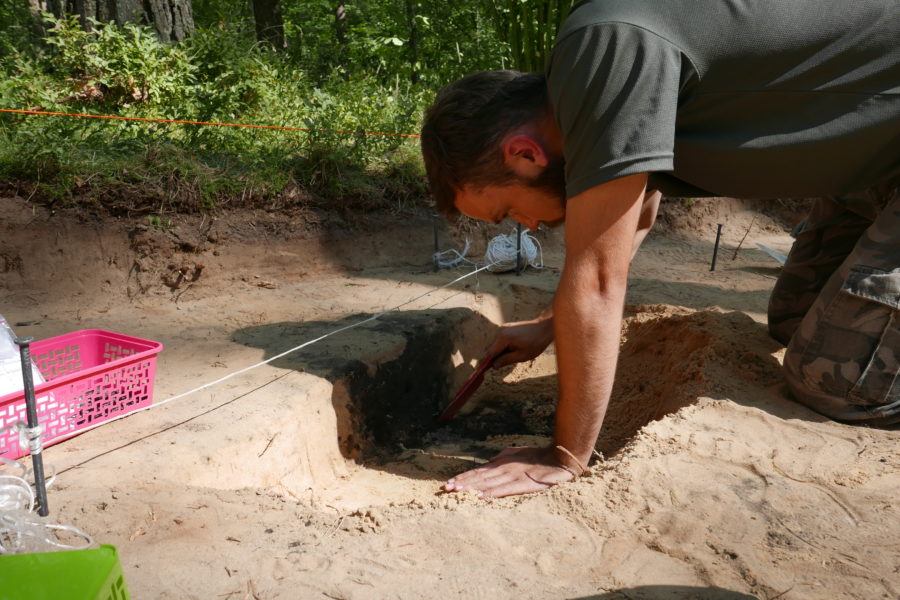 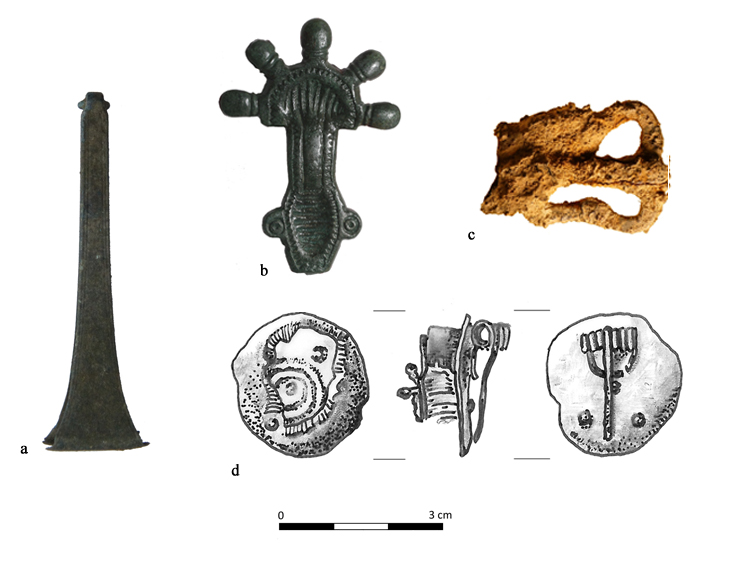 Person conducting excavation: Artur Grabarek, MA
Country: Poland
Site name: Podlesie, site 6,  Świętokrzyskie Voivodeship
Type of the site: cementry of the Lusatian Culture
Involved institutions:
Institute of Archaeology, University of Warsaw
Description of the research:
In the years 2014-2018, the area of 380 m² was investigated. About 13,000 artefacts were discovered: 9,000 pieces of ceramics, 2400 flint products, 100 obsidian products, 110 stone items, as well as clay weights, whorls, fragments of animal bones. Stratigraphic and planigraphic observations and the results of a comprehensive analysis of materials, clearly indicate that we are dealing with a culturally homogeneous group, constituting a remnants of the middle and late phase of the LBK. The nature of the finds makes the site Podlesie one of the most important points on the map of the KCWR settlements in the Nida Basin region.
Project: – 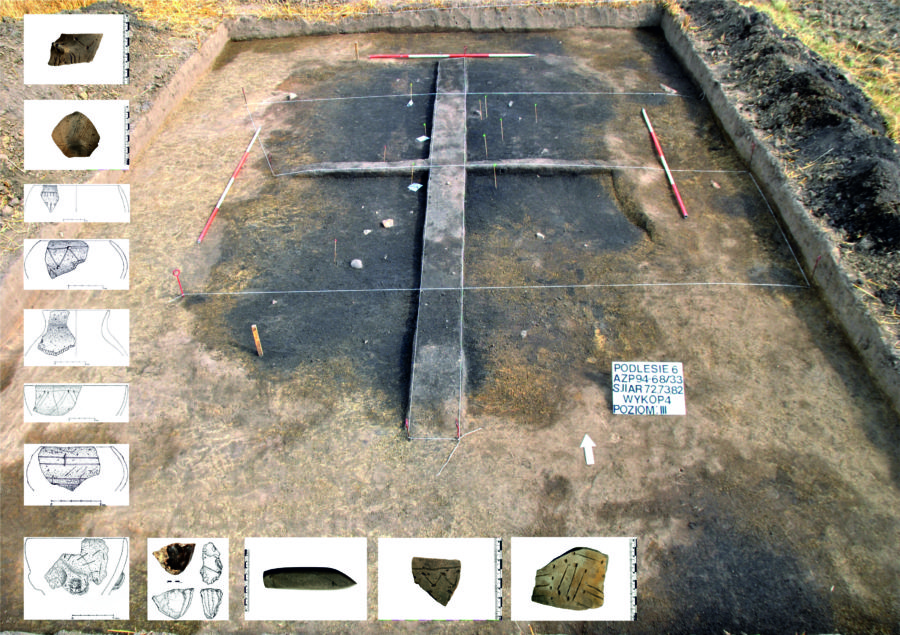 Person conducting excavation: Artur Grabarek, MA
Country: Poland
Site name: Podlesie, site 5,  Świętokrzyskie Voivodeship
Type of the site: cemetery of the Lusatian Culture
Involved institutions:
Institute of Archaeology, University of Warsaw
Description of the research:
Podlesie is a small village, located about 5 km east of Oleśnica in the świętokrzyskie voivodeship. In 2014-2017, excavations were carried out at the site, during which a surface area of 150 m² was investigated. Over 100 graves with cremations body in urn were discovered that belong to the Tarnobrzeg culture. A large scientific value is not only a diversified ceramic inventory, but also a very rich collection small bronze and flint artefacts. Some of them occurred in the grave context. Two well-equipped graves of the Przeworsk culture were also discovered. The analysis confirmed the similarity of materials from Podlesie to items of other cemeteries of the Lusatian culture in this region.
Project: – 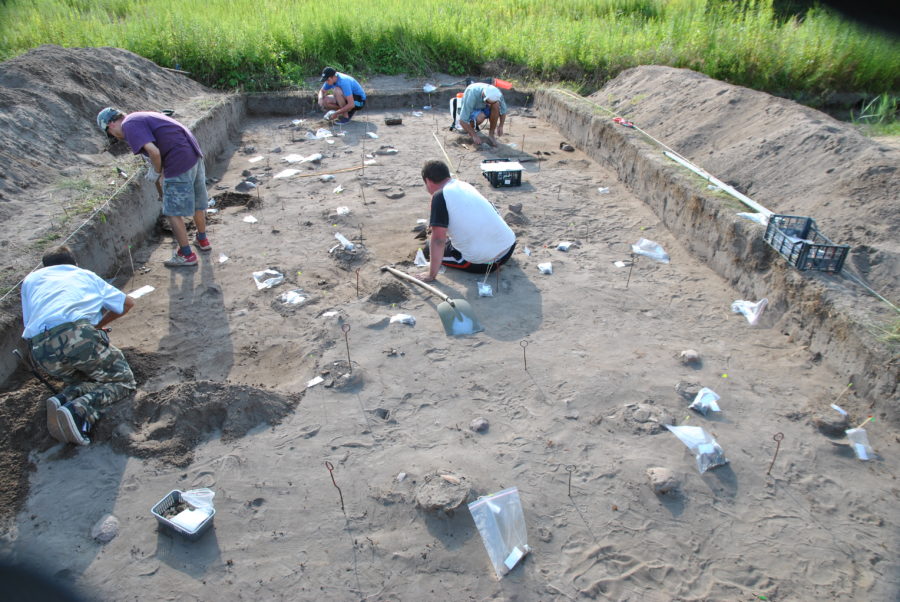 Person conducting excavation:Ass. Prof. Dariusz Manasterski
Country: Poland
Site name: Supraśl, site 3, Podlaskie Voivodeship
Type of the site: cementry of the Przeworsk Culture
Involved institutions:
Institute of Archaeology, University of Warsaw and and Podlachian Museum in Białystok
Description of the research:
Excavation works covered the area of sandy elevation among the backwaters of the Supraśl River within the Knyszyn Primeval Forest , where four ritual objects of the Bell Beaker culture have been recognized so far. There were also traces of the stay of the Corded Ware culture and Lusatian culture from the early Iron Age
Project:
Interdisciplinary research of the Knyszyn Primeval Forest microregion (financed from the budget of the Institute of Archaeology University of Warsaw and the Podlachian Museum in Białystok)

Person conducting excavation: Andrzej Maciałowicz, Ph.D.
Country: Poland
Site name: Gołębiewo, site 14, Warmian-Masurian Voivodeship
Type of the site: cemetery of the Przeworsk Culture
Involved institutions:
Institute of Archaeology, University of Warsaw
Description of the research:
One of the broadest cremation cemeteries of the Przeworsk Culture dated to the Late Pre-Roman and the Early Roman periods (2nd cent. BC – 2nd cent. AD), which provided, among others, a large series of iron weapons.
Project:
“Late Iron Age in Prussia – rescue excavations at the cemeteries in Czerwony Dwór (Site XXI), Gołębiewo (Site XIV), and Piecki (Site I), the Warmińsko-Mazurskie Voivodeship” – project completed in 2008 (together with P. Szymański and M. Rudnicki) as a part of the Operational Program “Cultural Heritage” (Priority 4), financed by the Ministry of Culture and National Heritage. 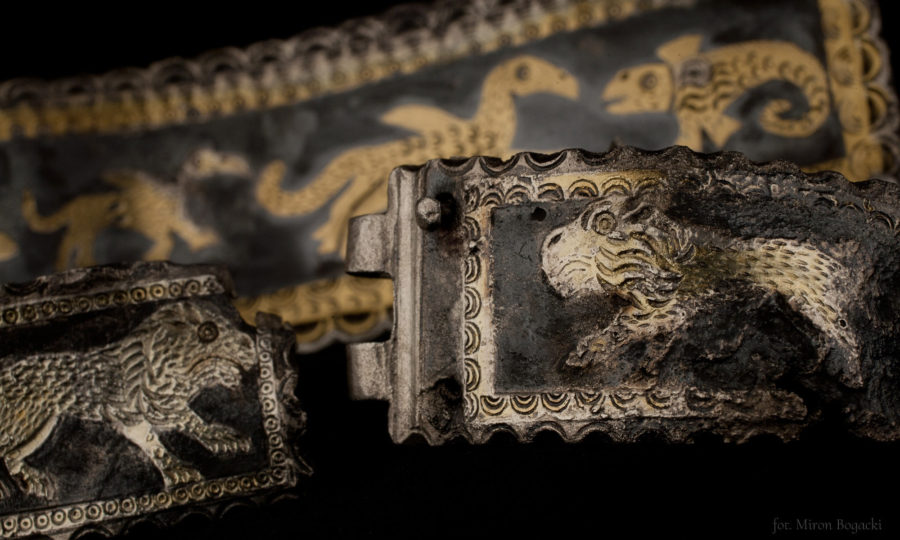 We are looking for volunteers for the Numismatic Congress !!!