Castillo de Huarmey is an archaeological site located on the north coast of Peru. Since 2010 it has been the subject of research of a Polish – Peruvian expedition led by Dr. Miłosz Giersz. Although it seemed that the desert site had been completely penetrated by looters a long before the researchers arrived at the site, 21st century technology, such as aerial photographs and geophysical imaging tools were used to locate the area with subterranean structures, dated to the ninth century AD. Two years later a major breakthrough was made with the extraordinary discovery of a royal mausoleum, where 64 female skeletons were discovered equipped with precious burial gifts including gold and richly decorated pottery, indicating their high social status. Additionally, they were accompanied with decorated textiles and weaving tools, studied in the discussed project entitled “Identity hidden in threads? Documentation and technological and iconographical analysis of pre-Columbian textiles from Castillo de Huarmey” thanks to the funding of the National Science Center (NCN 2015/19 / N / HS3 / 00880).

During the research, 2100 textile fragments collected from the site’s surface, the mausoleum as well as looters’ debris were documented using a high-resolution graphic scanner. Based on criteria such as measurements, presence of decoration and textile’s condition, 531 textiles were chosen for the detailed analysis of parameters such as textile’s structure, raw materials used in thread production, threads’ twist and colour. In the collection the most important samples are tapestry textiles, considered prestigious because of the presence of sophisticated motifs and the large amount of work needed for their production. There are also fabrics made in different techniques, characteristic not only to the north coast where the site is located, but also to the central and south coast, as well as the highlands. Together with technological analyses, technological studies were made, later compared with motifs known from cultures such as Nasca, Lima, Tiwanaku or Recuay, as the Wari gained from their outputs. Additionally, a slight influence of Moche culture was noted, which evolved on the north coast before Wari culture appeared in that region. The comparison of textiles from the Castillo de Huarmey together with Moche fabrics, determined that the common theory about Moche influence on described textiles is highly inadequate. These fabrics are characterized by different styles, including weaving techniques, colours, as well as iconographic motifs. This theory is supported by the presence of fabrics created in the new style. 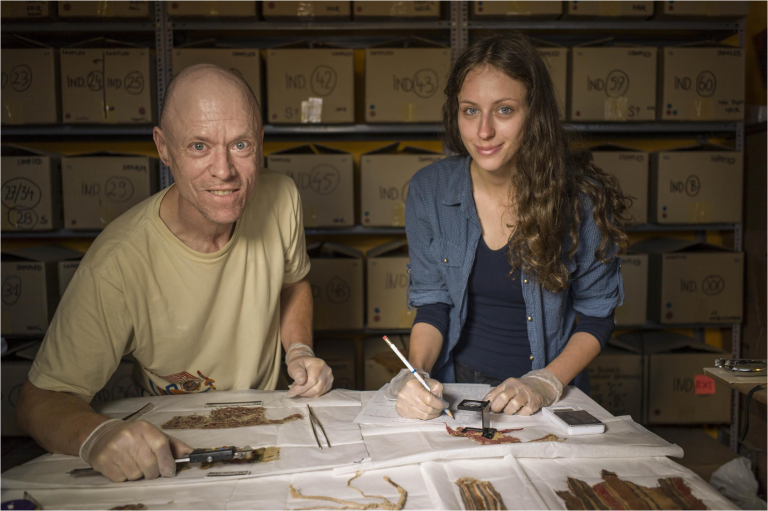 Fot. Jeff Splitstoser (left) and Aleksandra Laszczka (right) at the laboratory in Huarmey.

Undoubtedly, the results of technological and iconographical studies from Castillo de Huarmey allow us to broaden the knowledge about pre-Columbian weaving, and they indicate the traditions which inspired the Wari’s people, thereby creating a new technological tradition, in effect of the project realisation named as “Wari-Huarmey”. The gained results enable us to revise the incorrect but very popular opinion, that the studied textiles were created in the late phases of Moche culture.  Additionally, they are complementary to the results of different studies on the artefacts from the Castillo de Huarmey, which are spread in international conferences or on the „Treasures of Peru. The royal tomb of the Wari at El Castillo de Huarmey” exhibition, that in Poland took place at the Ethnographic Museum in 2018.